Showing posts from August, 2011
Show all

What I Want to Be

- August 25, 2011
What I Want to Be As a mom, I want to be: · Cheerful and loving · Engaging and creative · Someone they can turn to when they have a problem · A trusted confidant · Someone who is fun and fills my home with laughter · Someone who has a chaos-free, tidy home so I fee less stressed · Someone who disciplines well but out of love and out of a desire to see them grow into young women who love the Lord and respect others. But I am: · Sometimes moody and quick to chasten · Stuck in a rut · Someone who at times gets tired of the constant babbling and chatter · Someone who wants bedtime to be over so I can start working · Someone who is so serious minded that sometimes laughter eludes me · Someone who is constantly stressed about the mess – I really need someone to teach me how to keep my home so that it is not so overwhelming. · Someone who disciplines in frustration far too often. I have been reading a lot of blogs lately, blogs from moms who do things a bit differen
Post a Comment
Read more

- August 24, 2011
One of the principles taught in Parenting with Wisdom (yes, I know I failed in my summaries, but I do so much better with interaction so I kind of gave up. I promise you will love the book if you read it!) is time-delayed teaching. It’s actually a concept I learned first on Michelle’s blog, but basically, the idea is that the teaching we do with our kids often doesn’t fully “sink in” right when we are teaching. I have seen this first hand recently. One thing I have been working on is helping my children se all of the things they should be thankful for. For instance, when they are complaining about something I do not do for them that they want, I point out all that I do actually do for them. It usually does not work to stop the complaining. But apparently it is working after all. A couple of weeks ago we were coming home from church. Miss M was overly tired for some reason, and she wanted me to open a door for her, but daddy did it. She started to wail as if we had taken awa
Post a Comment
Read more

A Proper View of Beauty in Today's Society

- August 22, 2011
This morning I read this article about a French clothing designer marketing lingerie for young girls. Beyond the disturbing nature of the idea, the images were equally disturbing. It brought to mind something I have been thinking on. My oldest child is 5, yet already she is becoming consumed with “pretty.” We were driving one day and passed a Hooter’s billboard with one of the Hooter’s girls on it. “Mommy, that lady is pretty, isn’t she?” was the unsolicited comment from the back seat. I was taken aback. Yes, the lady is pretty, but do I really want to say that to my impressionable child? What is she noticing as “pretty,” the tight, revealing shirt or her pretty face? I was a bit relieved when a few weeks later we had a pastoral candidate at our church who had a 20-something daughter who played the French horn. She was a lovely young lady, but completely modestly and appropriately dressed. The same child leaned over and said, “Mommy, that lady is very pretty.” Just yesterday
1 comment
Read more

- August 12, 2011
I have had many periods of my life when I felt lonely. I remember sitting on my bunk at Maranatha as a brand new freshman, knowing only one other person on campus who I didn’t really think I liked all that well (but that’s another story altogether), wondering what life was going to hold for me. I was lonely. But that didn’t last long. Soon I was surrounded by people I grew to love and care for. I remember attending a church where I felt disconnected from most of the people. Most people were friendly, but they were so busy with their own needs and families that they rarely had time for others. Those who would perhaps have reached out lived far enough way it was difficult to forge friendships around busy schedules. Today, I can honestly say I am not lonely. But, in my lack of loneliness, I am noticing something. I am surrounded by lonely people. It may not be the person you would ever think feels that way. Perhaps the lonely one near you is surrounded by people on a daily bas
Post a Comment
Read more

Why I Love These People 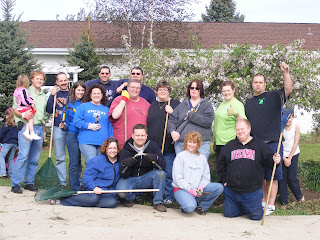 I am not funny. I think too much, and I think way too deeply into things. Sometimes, in social situations, I am so busy thinking about what I should say that I never say anything or I say the wrong thing. I really enjoy being around people, but social situations make me nervous because I am concerned I will do or say the wrong thing. I also do not have the skill that some people I know possess of making people feel comfortable or asking all of the right questions about them to make them open up. Which leads me to this. I love these people: Why? I've always had a few friends who I felt accepted the real me. A small group of moms of similar-age children, a handful of friends who have known me since high school, Tim, my family, etc. But for the first time, I have a large group of people I feel genuinely comfortable around. My church family is special. Last night we went bowling together and you know what? It didn't matter who was grouped with Tim (I don't bowl) in the
1 comment
Read more 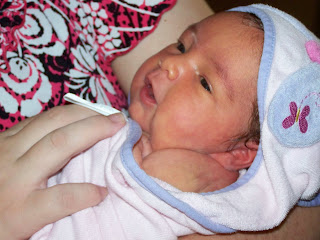 Three years ago, God blessed us with this 10 lb. 4 oz bundle of energy. Miss M, one day old Miss M, one year old Miss M, two years old Miss M, three years old. There are no words to describe this child's personality. She definitely knows what she wants and will do what it takes to get it, even if it gets her into lots of trouble. Here are some accomplishments Miss M has made this year: Truly learning how to talk and communicate verbally Learning to sing many songs, including Jesus Loves Me and ABCs Learning how to climb the ladder on our slide climber Learning her first Bible verse Attending her first Bible School Moving into a real Sunday School class Really learning to play with her sister Graduating into a "big girl" bed Potty training (woo hoo!) I am sure there are more, but these are the ones that come to mind. While this child brings many challenges that are quite different than her sister, in the last year she has really blossomed and become a joy to me.
4 comments
Read more
More posts