Showing posts from August, 2007
Show all

Nothing Is Quite as Fun as a Balloon 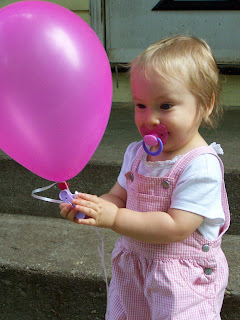 Today I took Natalie to the grocery store and they gave her a free balloon. Normally she is scared of them, but I think because she saw some older kids with them, she wanted it. She carried it around all afternoon until Tim got home. It was pretty cute. She also said "Duck" today (it sounded more like "guck" but it was pretty obvious.) As the school year begins, I am happy that I will not be returning. While working from home is a step of faith, because I never know how much work I will have, I am enjoying it immensely. Natalie is changing every day, and I want to be the one to mold her heart. We are going to join a playgroup to provide both witnessing opportunities and a chance to meet other kids. Here are some pictures of my girl and her new favorite toy! Sorry about the pacifier. I tried to grab it, but she wouldn't stop crying. We are working to break her off of it slowly. I also thought it was cool that the balloon matched her outfit! No balloon in this one
3 comments
Read more

We're Better and We Love Cousins!

Natalie is finally healthy! Yeah! We are so excited to have our happy little girl back. She has been eating a TON! It's almost like she is making up for a week of eating hardly anything. Oh, and her rash is better too - the $100 diaper rash cream did work! (She has a yeast rash). So anyways, this week I bought her a toddler bed off Craigslist. She's not ready for it, but it was really cheap and I wanted to have one on hand when I decide she's ready for it. She had lots of fun playing with it! Here's a video of that - NOTE: She does take a tumble off it in the end, but she is fine. Sorry grandmas, I know that will be hard to watch! Photo Sharing - Video Sharing - Share Photos - Free Video Hosting We also enjoyed a visit from Cheryl, Daniel, and Danelle (Tim's sister and her family). We took the girls to the Fair on Friday, and as you can see from the pictures, they really love each other! My brother Joey is here, too, so it's been a great weekend full of famil
Post a Comment
Read more 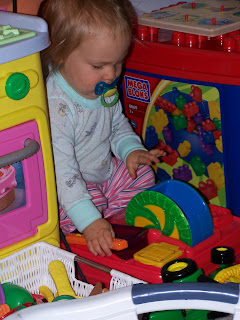 EDIT: I called the nurse at the pediatricians office and she is calling in some cream for Natalie's rash. Also, I have to take in a sample to check for any food poisoning, but she agreed that it sounds like a virus that just has to go through its course. Thanks for all the great advice. Right now all she'll eat is yogurt, but at least she's eating! I also switched her to pear juice from apple juice, because apple juice can make the problem worse. not sure if pear juice is any better, but I mix it 1/4 juice, 3/4 water, and that's about all I can do since it's all she'll drink. Well, our little girl is still sick. I feel like this is one of those "You know you're a real mom when . . ." moments. All I have done for the past few days (since Saturday) is change poop - and it's all over! Today we are on our seventh diaper and our fourth outfit, and it's only 11! She's actually still in her jammies top, and I have just been changing her bottom
3 comments
Read more 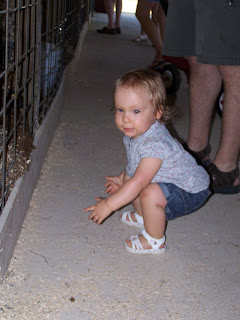 A lot has happened in the last few days. Natalie has been sick. She woke up on Friday with the runs (for a less nice way of saying it). We already had chiropractor appointments, and he found that all of the vertebrae that affect the tummy areas were out. He adjusted her, and she seemed better after a very long nap. Since she was her normal self, we went to the fair that evening. She had a blast! We thought she would fall asleep, but she didn't! We wore her out, though, because on Saturday she slept for four hours! But when she was awake we discovered a big yellow Caterpillar in our yard. She loved it! She kept calling it to come by her the way she calls the dogs. It was pretty cute. Today, however, she is sick again. It's strange because she has the runs, yet is her normal happy self, although she is quite sleepy. Anyways, here are some pictures from the fair and a video of her climbing into her rocking chair. She just learned how to do that today! Enjoy! At the petting zoo We
1 comment
Read more 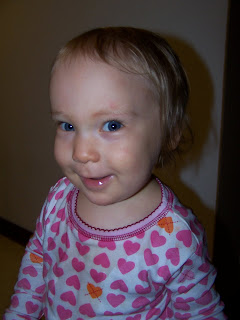 So I thought I would share a story with all of you. We believe strongly in the verse that says, "Train up a child in the way he should go, and when he is old he will not depart from it." As such, we have been striving to train Natalie properly with biblical discipline. Also, we have been attempting to instill in her a correct political bent even at an early age. This morning we saw fruits of our efforts. When Natalie came downstairs, Daddy was watching the Today Show. Hillary Clinton was on the TV. Natalie immediately picked up the remote and pointed at the the TV. We believe, of course, that she was trying to change the channel. Hey, who says kids don't care about politics! She is incredibly smart! Yesterday, two hours after she lost a puzzle piece, I was looking for it and asked her off hand where it was. She pointed to our linen closet, so I looked inside and, sure enough, the piece had slid under the door. Now, that wouldn't have been that big of a deal to me, but
3 comments
Read more

Her First Barbie Dolls (And Why I Love Garage Sales!) 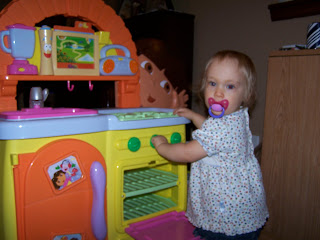 I struck gold today! I was on my way to Wal-Mart when I swung by a garage sale. The girl at the sale had some toys, and Natalie picked out a couple from the 10 cent box. Then we found a box of Barbies. Now, I do feel Natalie is a little young for Barbies, but she latched on to a couple of them, and would not let go. The girl (about seven years old) only wanted 50 cents for them, so I bought them. My daughter hasn't let them out of her site! Yes, I know she will ruin them, but hey, the smile on her face was well worth the Dollar. I have tried to get some pictures of them. She wasn't coropperating well. On another note, I have joined FaceBook. I like it! Tim has an account to. I have enjoyed catching up with friends from High School and College. I even found my old math and English teachers (they are married to each other.) So, if you are on FaceBook, look me up! What I like most about it is being able to see my friends' blogs! That's a quick, easy way to stay up-to-date
3 comments
Read more

Tim and Natalie have a new game! Enjoy! I don't think there is anything quite as cute as a baby giggling! Photo Sharing - Video Sharing - Share Photos - Free Video Hosting
Post a Comment
Read more
More posts